So that was Albuquerque. 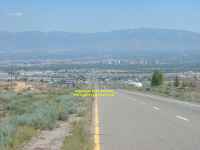 And this in the photograph on the left is Albuquerque too, down below in the valley.

I'd had a good drive around that morning hunting down a couple of shops that might (but didn't) have any four-stroke brushcutters or chainsaws. I'd also seen some nice sights too, but there was nowhere to park and in any case I was in a hurry. I should have been well in Flagstaff by now. I really regret not having stayed here last night and taken the opportunity for a good wander round. Ah well, it's all the more reason for wanting to come back again!

But here I'm at last out of the city in a sort-of south-east direction and up at the top of the hill. I'm on Route 66, at last with my back to Santa Monica looking in the direction of Chicago. Well, I would be, I suppose, if I had had a pretty big telescope. Over there in the background is Cedar Crest, and so is the Sandia ski area. Now that gives me an idea! Where are my skis? And when's the flaming snow? 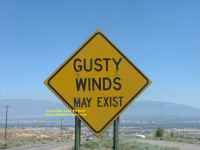 Now, are these signs surreal or what? There's definitely some kind of Kafka-esque influence at work in the US Highways department, that's all I can say. 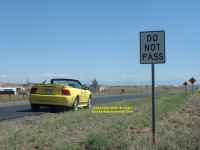 But just to show that the Brits aren't backwards in coming forwards, we actually have our own fair share of surrealism. It's nice to see that there is a "Freedom of Information Act" that works in Britain too!

Since the I40 opened, Route 66 has been declassified. It's now not an easy road to follow as much of it has been ploughed up, bridges demolished, or it's been cut into segments by the I40. This is a great shame, and I can't help thinking that these Americans have no sense of history. 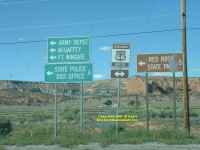 Occasionally as you're driving along I40, you'll see a tell-tale historic brown marker like the one here (just look at some of the names on these green signposts! All the fun you can have round here with a week or two to spare!).

So you dive off the Interstate, retrace your steps along Route 66 for a while, then all of a sudden the signposts disappear and you find yourself alone in the middle of the desert, or stuck at some temporary traffic sign talking to the workers whilst you await the pilot car to take you around some roadworks. 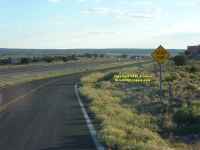 Or, even worse, you could find yourself up against something like this on the left. There are some people with some strange ideas of a sense of humour round here.

This "dead end" sign was a good half-mile down the road from the nearest point to turn round. In a car where you can't see very well out of the back on a narrowish road with unstable verges in fading light - good job I'm not an American otherwise I'd have never reversed the half-mile backwards up to the junction.

That reminds me
"Oh no - he's off again. Stop him, somebody"
Why can't Americans reverse? I remember being somewhere on Long Island a couple of years ago looking for a parking place, and seeing this gap in between two cars, I duly reversed in, like you do (or, like some of us do, anyway!). I drew quite a crowd too!

However it wasn't until a little later that I realised WHY they have such big parking spaces. It's so you can drive in and then drive straight out again, and I'd just blocked in some unfortunate American. Shame, hey?

But I digress. That road sign sums up Route 66 today. It's a dead end. Nothing but a journey of broken concrete, rutted tarmac, ruined buildings and demolished bridges as everyone gets on the Interstate and leaves their heritage far behind. Of course the coming of the I40 to replace Route 66 didn't always bring wealth and prosperity to everyone in the area! The bits of Route 66 you can still drive down are littered with abandoned motels, abandoned petrol stations, abandoned diners and so on. Abandoned cars are everywhere too. Good for people like me, but not so good for people trying to eke out a living along here! 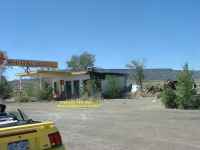 This petrol station here on the left is typical, and is also quite significant. Whiting Brothers at one time ran a whole chain of service stations all along Route 66, and they have been described as one of the "legends of America". They started off in Arizona in 1926 and before long they were everywhere along the "mother road". Many of them had motels, cafés, souvenir shops and the like attached, just like a modern European motorway service station.

However, the end of the mother road marked the end, more-or-less, of Whitings. Although there are many ruins throughout the south-west USA there is only one Whiting Brothers service station still working under its original sign, at Moriarty. But even that isn't owned by the company but by an employee who hasn't got around to changing the name.

It was just a little bit further on, where I stopped for petrol, coffee and to phone Lorna, that I had an interesting encounter. I'd read on the internet about these places in the States where you can hire big motorbikes and set off in a group to tour the States, and all the baggage goes in a truck that follows along behind. I'd always fancied a Harley Sportster 1200 and having a go myself. Just at that moment, in that service station, about 20 bikers and the truck turned up. So hearing a couple of people speaking "Nederlands" I went over for a chat. Any excuse to practise my Dutch!

It turned out they were a group following Route 66. Hearing that, I quickly finished off and sped up the road half a mile or so, and lay in wait at the top of a hill to photograph them as they rode past. They duly left the service station, and got straight back on I40! Some Route 66 explorers they were! I was most upset. 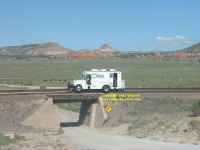 Now, how about this on the left for an interesting vehicle. It's some kind of maintenance truck that has road wheels and rail wheels for dual operation. I could immediately think of about 100 uses for something like this, especially as we have tram lines here in Brussels.

I saw something similar to this in Scotland in 2008. Yes, I'm all in favour of something like this. 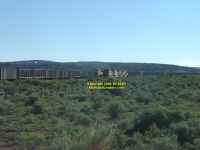 But here is everyone's worst nightmare around here. Trains average out at about a mile long, and at a top speed of 10 mph they can take as long as 6 minutes to pass a given point.

So here you are (at Gallup, New Mexico, in fact) at a level crossing waiting for a train to pass, and what do you see? Another one coming in the opposite direction that's going to pass the crossing just after the other one has cleared it. A nice 20-minute wait. This is evidently the origin of the phrase "I'm just going for a quick Gallup around while I'm waiting".

No wonder everyone goes these days on the Interstate, or zig-zags around the barriers when they see a train or two approaching. I had often wondered why so many people did that in the USA, but this obviously answers that question. 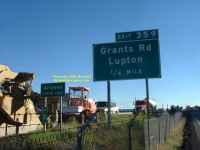 So having been back onto the Interstate for a while (and there's no better music to listen to on the Interstate than "Split part 4")you find some more of Route 66 and this takes you across the New Mexico state line into Arizona. Just for a change, the roadworks were on the I40. 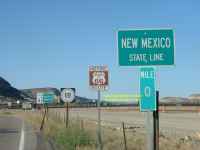 Here there were the usual Indian souvenirs (or maybe that should be siouxvenirs?) but also (on the Arizona side) a small local museum and tourist information centre. Nice friendly people - they gave me a free road map with details of all interesting places to see and to visit. And a very good map it was too. Thanks, people!

And onwards along Route 66 again. But just look at this for scenery. Now isn't this sort of thing worth the price of the air fare? 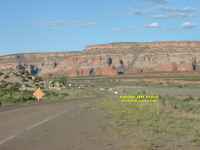 I can quite understand how Neil Young could sing about being "lost in rock formations" looking at this little lot.

But eventually 66 peters out again and you are obliged to get back on the Interstate for the final lap.

It's getting dark as well and I can't get used to the speed at which it gets dark around here! I pulled off the highway to get some fuel, and found myself at the side of a field or garden full of rusting cars from the 1940s and 50s. So I fuelled up, got myself some coffee, and when I came out it was so dark that I couldn't even see my car, let alone any car sitting in a field where it hadn't moved for 30 years! So, cursing and swearing, I set off for Flagstaff. Ordinarily, I would have waited until it got light next morning to photograph them (as poor Nerina would testify!) but I had a time limit to keep to.

But the darkness also meant I missed out on the opportunity to stand on a corner in Winslow, Arizona. So I never got to know if there was such a fine sight to see (and even if there were, it would have been too dark to see it), but Winslow will be there another day whereas my aeroplane won't!

I also missed out on Fort Wingate, Fort Defiance, the Painted Desert and the Petrified Forest (and probably lots of other things too!) but can't be helped. Trying to drive 2500 miles in 9 days to do some important shopping and visiting was always going to be asking a lot, without expecting sightseeing too. And don't forget - I wasn't feeling well either!

But never mind, Flagstaff was just around the corner.