The road across the Missiquash River brought me into back into New Brunswick and the final leg of my journey. 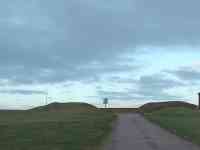 A short way down the road is Fort Beausejour. This area was part of "Acadia" and when the English in Nova Scotia built Fort Lawrence on their side of the Missiquash, the French responded by building Fort Beausejour. It was built in the style of Vauban, with five sides and defensive spurs.

It was completed in 1751 and a force of 150 soldiers and 1000 Acadians guarded the frontier for all of four years, until it fell to an English force of 2000 soldiers under General Monckton in June 1755 after a seige of two weeks. It was then renamed "Fort Cumberland" and was used by the English during the expulsions of the Acadians from the area.

It was attacked by "rebel forces" and American invaders at the start of the American War of Independence, but the attacks were repulsed. 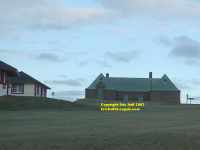 The fort was left pretty much to its own devices until 1812 when it was reinforced in case of attacks by American Forces, and finally abandoned in the 1830s when the area was turned over to cultivation.

In 1926 the area was created a National Historical Site and a report was made in the early 1930s proposing an archaeological excavation. It wasn't until the early 1960s that a preliminary excavation was made, and five years later major excavations were carried out, with many important discoveries being made. A museum and visitor centre were established on the site, which you can see in the photograph here. 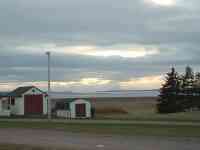 But you can see from the photograph here the reason for the importance of Fort Beausejour, with the view it commands (of course, the wooden buildings weren't here in those days) over the Cumberland Basin, the head of the Chignecto Bay which is itself the head of the Bay of Fundy. It's only a short distance across the Chignecto Isthmus to the Northumberland Strait (a few miles behind me) and the shelter of the Bay of Fundy and short march for an army make a great contrast to the dangerous sea voyage around Nova Scotia and Cape Breton Island.

There have been several proposals in relatively modern times for a canal across the Isthmus to avoid the dangerous sea voyage. Several projects have actiually made it off the drawing board and into the field but for reasons best known to themselves, all of them have foundered in the mud. 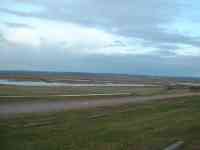 Just down the road from Fort Beausejour are the Tantramar Marshes with a view across to Sackville and Dorchester. This area was first setled by the Acadians well over 300 years ago and it was they who built the dykes to drain the marshes and keep out the sea water. They gave it the name "Tintamarre" which is Old French for "noisy place", a reminder of the early days of settlement with the noise of the sea birds that colonised the marshes.

Until the early days of the twentieth century it was known as "the largest hayfield in the world". The poet C.G.D. Roberts was inspired by the wild isolation here. Today it is famous for its wildlife such as raccoon, muskrat, beaver, mink and fox. Birdlife here include owls and one the largest breeding populations of marsh hawks in North America.

It was absolutely freezing here and I was listening to the radio, hearing how Prince Edward Island had its first major fall of snow. You should have heard the list of all the events that were cancelled. It certainly made for interesting news when you consider how they are supposed to be prepared for everything, compared to how the situation is in the UK where everything traditionally grinds to a halt in 2 centimetres of snow.

But it really was cold and the light was fading fast. I therefore made directly for Moncton where I planned to stay the night, and leave Sackville and Dorchester for another time.

I was taken ill again in the car on the way to Moncton, and with the cold and the snow (there was deep snow in Moncton) I found a motel straight away (I didn't even care about the cost) and left my tour of the town for another time. I just had a quick meal in the first restaurant I found, and went to bed.

The sad thing about just coming out of hospital is that quite often you don't realise just how ill you still are. And this was certainly the case with me. The drive around the Maritimes had worn me out and the previous day had finished me off. I'd talked to Rachel, so instead of driving around the Saint John / Fredericton area as I proposed, I went to spend the last night there before I went back home.

Fate wasn't finished with me yet, though. Remember earlier on that I told you that I was to have a "close encounter" with the local wildlife? Well, as I was driving in the area of Canaan (between Fredericton and Moncton), a magnificent stag darted out of the forest and tried to make it across the road in front of me. There was so much snow and ice on the road that I had no chance at all of stopping. I caught the stag by its hind leg and upended it onto the car bonnet and over the roof of the car into the forest.
Good job it wasn't an elk. I wouldn't be writing this now.
"Shame" I hear you say.

So instead of spending that evening relaxing in the bosom of the family, I was helping Darren knock the dent out of the bonnet of the Malibu so that the hire company wouldn't notice the damage when I took it back. I hope they aren't reading this page. 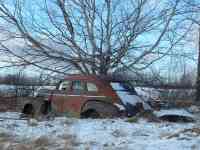 There was one final thing that needed to be done however. While I was staying with Rachel and family before I'd set off on my travels, we'd often passed a field near Lakeville where there was an old car that had been abandoned. I couldn't resist the opportunity to stop my car, and go for a walk across the field to have a peek.

It's actually an old Chevrolet from the late 40s or early 50s, I reckon (I suppose someone will put me right if it isn't) and although it's pretty far gone for restoration, there are plenty of bits and pieces (including some glass) remaining that would really come in useful for anyone who's restoring a similar model. If anyone's interested in it, and I'll see if I can put you in touch with the owner, and ditto if you can positively identify the car.

Or so I wrote in 2003. When I came back here a few years later I was told that the owner had passed away and the car had been simply tipped into a crusher and that was that.

No problems handing the car in. No-one seemed to care about how filthy it was, or the little ripple that remained on the bonnet, which was just as well. I was lucky in that I was in time for the aeroplane before the one I was booked on, which was all ready and waiting, so I took that one. 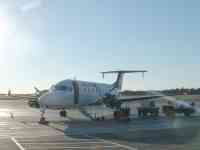 There were about six of us on the plane going to Halifax, and when you look at the plane you can see why. When we boarded, they were still fuelling it up with a hose and pistol just like you would do to a car. I'm a nervous passenger, and this did nothing to alleviate my fears.

Built by the Wright Brothers, it was piloted by Allcock and Brown, navigated by Amelia Earhart and Glen Miller was providing the in-flight music. And I was half expecting the "credit card" routine out of Airplane

Flapping our arms like crazy, we took off and flew relatively undisturbed to Halifax. Well - that is to say that some might have been undisturbed. I was certainly disturbed. And not by the noise either, even though I can safely say without fear of contradiction that I have never been in such a noisy form of transport in all my life, blown exhausts in diesel Transits notwithstanding. Anyone in their right minds ought to have been disturbed by flying in such a small aeroplane such as this.

At Halifax, I had a five-hour wait so I did nothing at all except read a book.

Then, on the plane to London (with a brief stop at St. John's in Newfoundland, so at least I can say I've been there) followed by a four-hour wait for my flight to Brussels. Believe me, the journey home was that uneventful. They even remembered my special meal.

You've probably noticed that I've been quiet on the subject of "music". Normally I take a pile of tapes and CDs and everyone seems to be interested in my choice of music. As usual I took a pile of CDs, and started off listening to some Al Stewart

. However I hadn't been in the car more than half an hour before I came across CHTN Radio from Prince Edward Island. This station plays a selection of music from the 1960s and 1970s as well as giving all the local news (which was very informative) and adverts for local businesses (very amusing) and interesting chat. There was also commentary on the local ice hockey games, although not quite in the Raymond Glendenning style.

So having found this radio station, I forgot about my CDs. I mean, who could argue with that?

So, how was my holiday? All in all, I'd had a good time and I'd really enjoyed the company of Rachel, Darren, my three nieces Zoe, Hannah and Amber, and Bob and Ellen. I just wish I'd been in better health to have enjoyed my drive around. Never mind, it's a good-enough excuse to go back again.