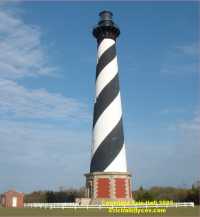 The Historic Albemarle Highway brought me down here to the world-famous Cape Hatteras lighthouse.
Far away in other space

A Lighthouse guiding star
It's there to help you, human race
and tell you where you are

So take a fix on Lighthouse
And home into its beam
And light the lasers in your heart
For all the world to see
©1979, Tim Blake

The area off the coast just around here is known as the "Graveyard of the Atlantic" and if you were to look at a map of the shipwrecks in the area, you will quickly see why. As I mentioned earlier, the prevailing onshore winds coupled with sudden storms, the pitch darkness, faulty navigation with primitive instruments, poor lookouts and treacherous currents have caused wrecks to be piled up here for centuries. There are over 500 known wrecks out here - who knows how many unknown wrecks there are.

Sooner or later, the authorities would become fed up of valuable ships and their even more-valuable cargoes being lost out here so close to home, and it was no surprise that the coastal fort-building programme to which I refer elsewhere made reference to a lighthouse. In 1794, Congress authorised the construction of a lighthouse not too far away from the present spot, and it was completed, all 90 feet of it and in sandstone, in 1803.

Despite the construction of the tower, however, lilttle changed. The whale-oil lamp was nowhere near bright enough to provide an efficient warning signal and in any case, the strong winds used to break the window of the lighthouse and extinguish the lamp. Complaints were legion and the maritime community was completely fed up.

The complaints of one Lieutenant Davenport of the US Mail Service were so strident that the newly-created Lighthouse Board in 1852 launched an enquiry, and this led to further financial appropriations being made. In 1854, the tower was raised by another 60 feet in height and, probably more importantly, a new series of lenses and magnifiers was installed to make the light many times brighter, with a revolving beam. This gave the new improved lighthouse a much more prominent role, and the complaints died away.

The Civil War saw heavy fighting around here as the Confederate forces fought to keep the light out of the control of the Unionists and although they were eventually defeated, they so damaged the light that it was rendered effectively useless. One of the repercussions of this was that the legendary USS Monitor was lost off the coast just here in 1862 whilst in tow from the USS Rhode Island on the way to Beaufort, North Carolina although her top-heavy design and low freeboard coupled with a heavy swell and a strong wind may well have been major contributory factors.

Once the war was over, the condition of the lighthouse was investigated, but it was found to be in too poor a condition to make it worthwhile repairing, and proposals were made for a new mega-light to take its place. In 1867, Congress appropriated $75,000 for the construction of a new light and work began on this magnificent structure of 208 feet and 1,250,000 bricks.

When it was completed in 1869, tts predecessor was dismantled. It was proudly proclaimed to be the tallest brick-built lighthouse on the North American coast (is this therefore admitting that there is a taller brick-built lighthouse inland somewhere?) and its beam could be seen over 20 miles away. There are 248 spiral stairs inside the light that take you to the very top. Its final cost was $155,000, so it wasn't just the staircase that spiralled. As you can see, overrunning budgets is not a new phenomenon. 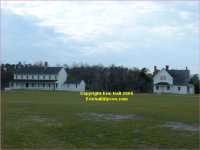 Accommodation was provided for the crew of the lighthouse. The small house that you can see in the photograph here on the left was actually the house of the lighthouse keeper and his family. The rest of the crew and their families lived together in the larger house

The light still retained its oil-vapour light from the previous lighthouse, as well as the revolving beam. This turned once ever 7.5 seconds and revolved by means of a gear worked by a descending pulley. A complete descent of the pulley took 12 hours, and then the poor keeper had to manually wind it back up again. When the light was finally electrified in 1934, this revolving mechanism was also electrified.

Encroaching seas and coastal erosion caused it to be abandoned in 1936, and a steel frame tower was built to replace it. However, a shift in direction in the coastal erosion caused the steel frame tower to be abandoned, and the lighthouse was reactivated. A new much-more powerful light was installed in 1972, and there have been reports that under certain circumstances the light has been seen more than 50 miles out to sea 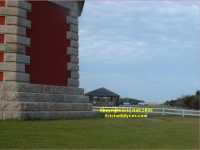 In March 1980, a severe storm destroyed the remains of the previous light and threatened the existence of this one. Earnest discussions thus ensued as to the future of the light, and it was eventually resolved to move it bodily out of the way. In 1999 they cut it from its base with a diamond saw, slid a railway track underneath it, and moved it all the way back to where it is now.

You can see in the photograph here that "it came that-a-way", 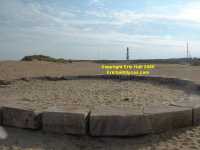 Curiously enough, both the new light and the previous one were not build on piles, but on timber rafts. When the lighthouse was moved it was discovered that despite the passage of 120 years, the timber rafts were still in perfect condition.

There's a streaming web cam of the lighthouse, to keep you interested as you search through my site. 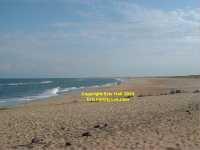 And this is Cape Hatteras. This is where I had come to be. The end of an island is right down there a couple of miles. And believe me, if I'd have had more time, I'd have walked down to the very end of the Cape. These sands were really beautiful. I can really understand the attraction of people wanting to come on holiday here. This was quite a magnificent place to be.

But meantime, back to the wreck of the USS Monitor. It was rediscovered off the coast in 1973 and was declared a marine sanctuary - one of the very few so declared whose purpose is to protect a cultural or historic source rather than a natural phenomenon. This declaration has not however prevented a great deal of recovery work being undertaken on the wreck. A number of artefacts have been recovered, including the gun turret. When the turret was explored, a skeleton was discovered. Unfortunately, the presence of this war grave did not give anyone any inhibitions about raising of the turret.

From here I thought about wandering down to the beach.