There will be a navigation menu here when all the pages are complete
In the meantime, you need to return to this page.

At some point or other on my mega-London ramble I'm going to have to talk about what is commonly known these days as "social housing" and what in the old days used to be known as "council housing" when there were councils that were interested in caring for the poor in their community, and doesn't that seem like a lifetime ago?

Local Authorities had had an obligation since 1875 under the Artisans' Dwelling Act to ensure that accommodation fulfilled certain basic requirements. This Act also gave them powers to launch slum clearance programmes and to replace them with modern homes fit for the purpose, but this was an Enabling Act. It wasn't until the "Homes Fit For Heroes" Housing Act of 1919 that Local Authorities became obliged to provide affordable housing for the needy.

So prior to 1875, there wasn't really much on offer. That is, except for the great social reformers such as George Peabody.

Any account of housing for the poor in the Victorian era makes frightening reading. One book,

the purpose of which was to recount the story of Jack the Ripper, nevertheless devotes almost an entire chapter to the discussion of the dreadful conditions in which the people were living - almost as bad as the conditions in Fallujah after an American offensive (and nowhere have the Americans been so offensive as in Fallujah). And the events of Jack the Ripper were in 1888, remember, after the passing of the Artisans' Dwelling Act. The conditions prior to that date must have been indescribable.

Seeing as how we have been discussing Americans "Well, one of you has" - ed, the irony of this is that George Peabody, founder of the Peabody Trust, was an American, born in Danvers, Massachusetts, in 1795.

As a youth serving in the war of 1812, he encountered Elisha Riggs. In 1814, they launched a company, Peabody, Riggs and Co that specialised in the wholesaling of dry goods, and two years later Peabody moved the business to Baltimore.

Peabody originally visited the UK in 1827 on what would become known today as a "buying trip", and also to find markets in Lancashire for the purchase of cotton to purchase wares and to negotiate the sale of American cotton in Lancashire.

It is very likely that he was helped by another Baltimore businessman, the Irishman Alexander Brown. He had emigrated to Baltimore in 1800 or 1801 and had taken local business by storm, so much so in fact that in 1810 he opened a branch of his business in Liverpool. In any case, British business began to play more of an important role in Peabody's affairs, and in 1835, the banking firm of George Peabody and Company was established in London.

It seems that Peabody had been invited to meet Baron Nathan Mayer Rothschild, who put a most unusual proposition to him. Rothschild is said to have told Peabody that despite his wealth, he had not been able to penetrate London society. He suggested that Peabody should entertain London society on Rothschild's behalf, and of course at Rothschild's expense. In 1837 Peabody took up residence in London where he remained the rest of his life.

Of course, friendship with the Rothschild family opened many other doors, and it was said that Peabody had an operating capital of £500,000 - which was a fabulous sum in early Victorian days. With that amount of financial support it is no surprise that business prospered, and he appointed the Boston firm of Beebe, Morgan and Company to act as his agents.

In 1851, many American companies had taken advantage of an offer by President Fillmore to ship their wares to be exhibited at the Great Exhibition at Crystal Palace, London. However the American Congress refused to advance the necessary funds to pay the expenses of the exhibition - a decision that was met with derision by the British. Peabody paid the £3,000 demanded, and his fame was assured.

Peabody never married and had no heir. As he grew older and his thoughts began to turn to retirement he invited Junius Morgan of his American agents to join him in London. Morgan became a partner in 1854 and succeeded to the business on Peabody's retirement ten years later, changing the name of the bank to J. S. Morgan and Co. Many of the financial institutions that today bear the name "Morgan" are the descendants of the Peabody bank.

Peabody had initially planned to retire to the USA, but felt that in view of the debt that he owed London he should make some kind of provision for the poor of the city. He had long held education in high regard. In fact, as far back as 1831 he had written to his nephew, David Peabody, to say
"Deprived, as I was, of the opportunity of obtaining anything more than the most common education, I am well qualified to estimate its value by the disadvantages I labour under in the society in which my business and situation in life frequently throws me, and willingly would I now give twenty times the expense attending a good education could I possess it, but it is now too late for me to learn and I can only do to those that come under by care, as I could have wished circumstances had permitted others to have done by me."

Another thought that had crossed his mind was to perhaps provide clean drinking water.

An encounter with Lord Shaftesbury however led Peabody to change his mind. Shaftesbury was a great social reformer and pioneer of many causes. One matter that was preoccupying him at that moment was the question of housing for the poor. Several schemes were already in existence, some for as much as 20 years, but in 1862 Peabody set up his Peabody Donation Fund with a sum of £150,000, which was later increased to £500,000.

In fact, during his lifetime, Peabody made a considerable number of charitable donations, totalling about $8,000,000, well over £1,500,000. So much so that he has been described as "having established the practice later followed by Andrew Carnegie, John D. Rockefeller, and Bill Gates" (you can tell that it was an American author who had never heard of Joseph Rowntree, Lord Leverhulme and the Earl of Shaftesbury to name but a few). And of these charitable donations, London and the Peabody Trust received by far and away the lion's share.

His philanthropy was quickly recognised, and on 10 July 1862 the MP and philanthropist Charles Reed proposed a motion that Peabody be granted the Freedom of the City of London. He became the first of only two Americans (the other being Eisenhower) to have received the award. A statue of him was unveiled next to the Royal Exchange in 1869, on the site of what was formerly the church of St. Benet Fink, which had been demolished in 1844.

Unusually for the day, and even more so considering that Shaftesbury had a reputation as an Evangelical Christian, the Peabody Trust did not promote religious beliefs. Quite the reverse in fact. He made it quite clear that the Trust was "not to be used to nurture sectarian theology or political dissension".

The trustees were aware that other charitable schemes had become embroiled in financial difficulty, so one of the provisions upon which the trustees insisted was that the fund was to be self-financing and thus self-perpetuating. They decided that there would need to be a return of at least 3% on the capital sum.

In 1863 the Peabody Trust paid £3,000 to the Commissioners of Works to buy the site of what is today 135-153 Commercial Street. The architect H. A. Darbyshire (or sometimes Darbishire), more famous for his work for Lady Angela Burdett-Coutts in Columbia Square, Bethnal Green and the Drinking Fountain in Victoria Park, Bow, was engaged to design a block of family homes, and these were opened on 29 February 1864. 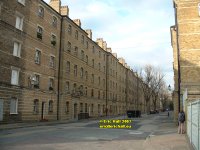 It was while we were musing on all of the above that Liz and I stumbled accidentally across the Peabody Estate in Pimlico.

This site was formerly an undeveloped part of the Chelsea Waterworks which passed into the hands of the nearby London, Chatham and Dover Railway. When that company was in the throes of financial difficulties in 1874, it sold the land to the Peabody Trust. 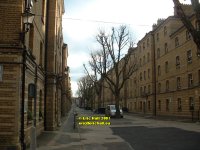 Darbyshire redesigned one of his typical family tenements to meet the long, narrow dimensions of the site, and created an Avenue that was 280 metres long. Construction was completed within 5 years.

The buildings that back onto the railway are five storeys high whereas those on the other side are but four storeys, as you can see.

The trees that line the centre of the street are plane trees, typical of the area. 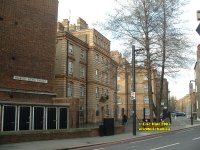 Several years later, some blocks of another design were constructed on the site, one of which you can see here. The difference in style is due to their proximity to the river. The Grosvenor Estate, the owners at the time of much of the area around here insisted that they have a more ornate appearance to reflect the quality of the rest of the area.

I shudder to think of what the owners of the Grosvenor Estate might have said about the Battersea Power Station, which was built across the river from here in 1927 and which caused an outcry that lasted for a generation 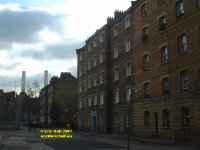 In this photograph there's a view of the Battersea Power Station. There's also a good view of one of the several open spaces in the avenue today. These are the result of bomb damage to the avenue by near misses in World War II from German bombing when aiming for the railway line.

I wondered if this was the significance of the plane trees here. I thought that I was branching out on a limb with this theory so I had better leaf it alone before I sap my strength. I'm obviously barking, and not up the wrong tree either.

Four of the traditional blocks were destroyed and not replaced, whereas one of the later type was badly damaged but was renovated in a post-war "Austerity" style. 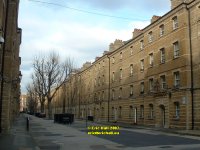 In its heydey, the Peabody Trust accounted for almost 20,000 homes and provided accommodation for over 50,000 people on its 40 or so sites spread across most of the London of the late 19th Century. Today, the Luftwaffe and the various privatisation policies of various British Governments have reduced the number to some 17,300 or so, of which we are told that 309 are wheelchair-friendly.

As for George Peabody, he died unmarried on the 4th of November 1869, and was laid to rest in Westminster Abbey with the approval of Queen Victoria and the Dean of Westminster. His will however requested that he be buried back in his birthplace of Danvers, Massachusetts, which had been renamed Peabody in his honour in 1868. Sir Edward Reed's "HMS Monarch" of 8332 tons, the Royal Navy's first ocean-going turreted warship and the first to carry 12-inch guns, was dispatched along with "USS Plymouth" to return his cadaver to the country of his birth.

His remains now lie alongside his mother, in the company of other notable American stalwarts such as Giles Corey, one of the accused in the Salem Witch Trials and who was executed by being crushed to death by stones; and that of Alfred de Salvo, otherwise known as the Boston Strangler.