IT TAKES 5000 NUTS TO HOLD A TRANSIT VAN TOGETHER - AND ONE NUT TAKES IT ALL APART! 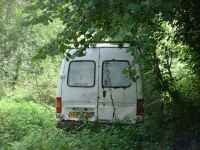 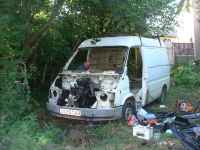 2- With deft use of a couple of spanners, large brick and 12lb lump hammer, Paul disables the van and renders it incapable of fighting back 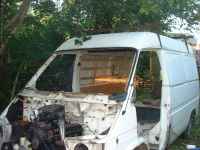 3- With the van now completely disabled and incapable of fighting back, Paul gets to work and ruthlessly sets about decapitating the beast 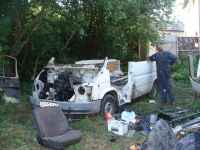 4- Decapitated, the beast is mortally wounded. Its head lies on the ground and only its writhing cadaver remains. Paul is satisfied with his day's work, and is eager to continue his assault on the stricken beast

In common with most superheroes, Paul is possessed of supernatural powers, such as

Please don't try to imitate the Auvergne Stihlsaw Massacre at your own home. You risk developing magical powers too - such as the ability to transform your father into a quivering mass of rage.