Knowing that I was coming to Montreal, my aunt had set me a task to prove that I was worthy, so next morning it was off to the Mount Royal Cemetery, grave hunting.

In Mount Royal Cemetery is a section that is reserved for military personnel, those who died while on active service or died subsequently from wounds.

My family on my mother's side come from the West Country of the UK. My great grandfather Thomas W Cooper had fought in the South African War for one of the Wiltshire regiments of the British Army

He, his wife and children emigrated to Canada in 1906 and signed up in 1914 for the Canadian Army in the First World War at the outbreak of hostilities, even though he was well over the age limit. The call to the colours was far too strong for an old sweat like him.

His subterfuge didn't last too long. Life in the Army in World War I was far more strenuous than he imagined and finally in 1917 he was invalided out, crippled with arthritis and rheumatism.
"Age 53 and looks it" said his medical report..

He died in the 1920s when he was in his late 50s, presumably of symptoms relating to his army service, and was buried here in Mount Royal Cemetery.

I'd been sent here to find his grave and photograph it, and it is here on the left.

After his death my great grandmother and her unmarried children returned to the UK, but we as kids knew nothing of this. My grandmother died young and my mother and aunt were brought up by relatives. They never knew the story.

My aunt began to trace the family tree after retirement and this is how we came across details of her grandfather.

An interesting anecdote that was recounted to me was that after my aunt had tracked down her grandfather (my great grandfather), she made her way over to visit his grave.

Standing there at the graveside was another group of people, so she engaged them in conversation. They turned out to be descendants from one of the married children who had remained in Canada. It was at that moment that she realised that she still had living relatives over here and the rest, as they say, is history.

I mentioned my distant cousin Gary Jewell earlier. He had family who served in World War I, and I stumbled across the grave of Arthur Jewell, one of his relatives, quite by accident.

You can see by the design of the headstones that they are military graves.

This is the traditional Commonwealth War Graves pattern, that was designed by a committee of artists led by Mr D.S. MacColl, who was Keeper of the Wallace Collection and Sir Charles Holmes, who was Director of the National Gallery.

The font was the work of Mr Macdonald Gill, a caligrapher and architect better known for his work on the London Underground maps and in the House of Commons. 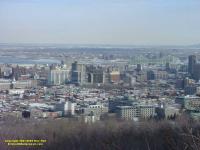 While I was up on the Heights of Montreal I took the opportunity to take a few photographs of the city. You can see that the view is really impressive from up here.

Although I didn't have much time, I didn't want to waste the opportunity of seeing the city, so I took quite a few shots to give a sort of panoramic effect of the view that you have.

You can see the really good view of the city and the St Lawrence River from up here, as well as a really nice girder bridge in the photograph on the left.

I'm a big fan bridges and industrial archaeology by the way, in case you are wondering. 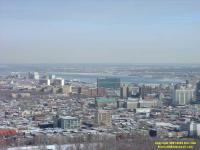 In fact, this view had me thinking. I could easily imagine the damage I could inflict on the city from up here if I had a couple of cannon at my disposal.

There isn't any finer example of the old saying "height is might" than the view from here, that's for sure when we're talking artillery.

Yes, give me three or four field guns up here and I could paralyse the entire city. There'd be no traffic at all coming up, down and over the river, and the port would be at a standstill. 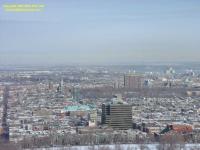 Even better, how about being holed up here with a Stinger Missile launcher or two. There are credible reports that there was one that went missing in Afghanistan in the early 1990s and was traced as far as Rotterdam in 1995.

All sight was lost of it just before a container ship set sail from Rotterdam to Halifax, and it was strongly suspected that the Stinger Missile Launcher was on board that ship. 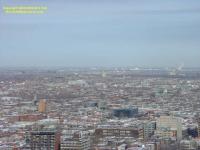 When the ship arrived in Halifax, there was no trace of the Stinger Missile, but there was also no trace of several of the containers that were known to be on board either.

This is of course not unusual. Shipping containers regularly fall off ships and as they float very well when sealed, they are a known hazard to other shipping

Speculation is rife that the particular container that housed the Stinger missile was deliberately pushed overboard off the North American coast and picked up by a smaller boat. From there, it was smuggled over to the USA on the Bar Harbor ferry.

It was round about this time that normally reliable airline pilots reported themselves as being under rocket attack when landing at or taking off from JFK, and there have long been allegations that TWA 800, that crashed off Long Island on 17th July 1996, was brought down by a missile

Not of course that any of the foregoing is ever likely to be proved, and you may dismiss it all as conspiracy theory gone mad. And who knows?

But don't let yourself be misled.

Anyway, lets get back to the tourism bit. 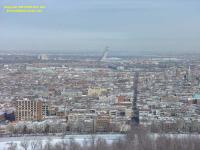 In the photo on the left at centre middle distance you can see the Montreal Olympic Stadium. Montreal was the host of the 1976 Games, Games which were famous for being mired in controversity.

There were allegations of wholesale drug use against many teams. One American critic, Shirley Babashoff, complained about the East German swimming team, accusing them of having taken steroids - pointing out their impressive muscles and in particular their deep, almost masculine voices.

This led to the world-famous quote from an East German official, who said "my girls came to swim, not to sing".

Furthermore, 26 mainly African teams boycotted the Olympics due to the New Zealand team having played rugby against the ostracised South Africans a short while before, and Taiwan was excluded.

If this wasn't bad enough, the province of Quebec had spent over 2 billion dollars on construction projects and the like for the games, some of which failed spctacularly and the whole thing became a financial disaster.

The Québecois were plunged into a financial crisis that lasted for decades. 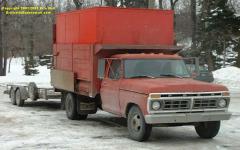 Now, just suppose I had enormous pockets and an unlimited baggage allowance. What would I bring home from my voyage around Eastern Canada and Northern New England?

Yes, absolutely. I'd have to find some room somewhere for this set-up.

In case you are wondering, it's a Ford 3-ton F350 pickup with a horsebox body, and towing a nifty car transporter. 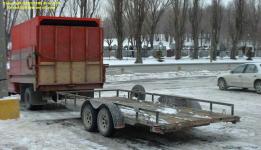 There were quite a few horses and carriages wandering around just here, and I suppose this has brought an outfit along.

I could see myself being extremely happy with this truck, as long as there was a straight-six diesel motor in it. Does anyone know where I can find one?

I'm willing to work out an interesting deal over a set-up like this. You can see the Cavalier at the side of the trailer. I'd sneak it onto the trailer and then disappear into the sunset without a moment's thought if I could get away with it.

Next step was to go into the city to find the registrar of deaths to get some further information about my great grandfather.

I spent a long time walking around visiting all kinds of offices, but didn't have any luck at all. And my plane was waiting so I couldn't spend too much time hanging around being insistent.

But one thing puzzles me though in all this. In all my dashing around Montreal, how come I didn't take any photographs? I can't believe it.

So what did I get out of this holiday? Well one thing is for sure - that is where my future lies. I enjoyed Canada so much that I didn't want to go home

But for those of you who are going home, a word of warning.

Montreal Dorval Airport in early 2002 was the site of one of the greatest acts of air piracy anywhere in the western world.

After you've checked your baggage in and go to passport control, you have to pass another barrier. Here you have to pay a "airport renovation fee" of $15 CAN in order to proceed further.

There are no signs anywhere in the airport or on any travel document that this charge is levied so if you haven't saved the cash and have spent up your credit card you have real problems. But even so, you still have to pay it.

The Airport authorities should be ashamed of themselves. Flying (for me and for countless others) is a really stressful business without being made to "stand and deliver" for some modern Highway robbery or blackmail such as this.

This was aggravated by the fact that long-haul flights to Europe are pushed off into a departure lounge somewhere in a lost corner of the airport.

When the plane was delayed, everyone wanted a coffee or to use the bathrooms but there was neither available in this departure lounge and the authorities announced that because we'd already been searched once (and because probably they couldn't be bothered to search us a second time) we wouldn't be allowed to leave the departure lounge.

Needless to say, I was so stressed out by this time that I got my coffee and bathroom, in exchange for which a couple of policemen got a piece of my mind and a right ear-bashing. What are these pills that the Americans are giving their Taliban prisoners to "calm" them down on the "extraordinary rendition" flights, and where can I get them?

All in all, I found leaving Montreal Dorval was an unpleasant experience. It is not a nice place to be.

Added to this British Airways forgot my special meal AGAIN so I flew back to Heathrow for 6 hours 55 minutes, starving and hungry. All this seems like good enough reasons to stay in Canada.

So, 8 days, 3108 kilometres, two countries, two ferries, 6 states or provinces. Then back home to rewire, plaster and tile a kitchen with a three-day time limit.

When's the next holiday to recover?