I must have been ill that night and next morning because I left Amherst without taking any photographs of this quaint, picturesque frontier town (because that is in effect what it is) or the really nice causeway that leads across the barren windswept marshes off Nova Scotia and into New Brunswick again.

That was really a shame. It was such a nice place that I will have to come back and taunt a second time. 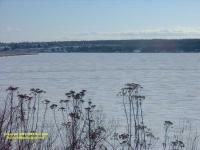 After a good night's sleep I was starting to feel a little better (but the coughing didn't go away for nearly a month) as I drove along the road so having put a great deal of ground under the wheels I stopped to take a couple of photographs.

The first one on the left is the head of the Bay of Fundy somewhere near Moncton. You wouldn't think that this is the headwater of the highest tide in the world just by looking at it. 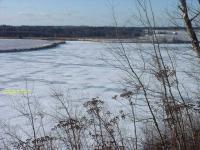 This photograph is of a frozen river near Petitcodiac. You can see how cold it is this morning. I can't think why I never took any photographs of Moncton either. I can't have been that well, that's all I can say

Even more bizarre I came back to this area a few years later. And I didn't take any photographs then either.

In fact both times I've come here, I've ended up by being taken ill. There must be something about the place, that's all that I can say, although I don't know quite what it might be

From here I continued on down the Fundy shoreline, without stopping to take any more photos. As i've already explained, I'm already 48 hours behind schedule thanks to my unexpected drive around Nova Scotia and the ferry issue at Yarmouth, and I'm only here for a week or wo. 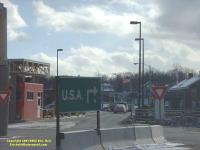 My route took me through Saint John (again, only this time north - south instead of west - east) and inevitably southwards without stopping, until I arrived at Saint Stephen, at the very southernmost point of New Brunswick.

This photograph is showing a view across the River St. Croix from Saint Stephen. And the other side of the river is Calais (pronounced, for some unknown reason "CALLAS"). And Calais, for the uninitiated, is in Maine, which is in the USA.

Now the reason why all of this is significant is that for quite some time I'd been having a dispute that was still ongoing with a group of Americans, one of whom had the most unlikely name of Randy Paynter (he would never be short of work if ever he went to live in the UK).

At one point in our discussion he told me that he had reported me to the CIA. Apparently it's a heinous sin to dare to disagree with this randy painter or whatever he calls himself.

According to this Randy Paynter, the CIA were going to "get me" if ever I set foot on U.S. territory ever ever again.

By that they probably meant that they would bash me up behind the bike sheds at playtime, such is the debating capacity of Randy Paynter and his friends. It seems that many Americans have a hard time graduating beyond the Kindergarten stage.

They say that the proof of the pudding is in the eating. Now is the time to put things to the test. 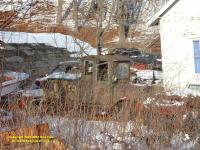 Now, I'm either being "economical with the truth" about this photograph, that Randy Paynter guy has been talking total nonsense, or it could be that American border security is a total waste of time.

I shall leave you to make up your own mind.

But while you're doing that, you can have another look at the photograph, and now you can see exactly why I like rural U.S.A.

Here in someone's garden at the side of a highway is a 1920's truck - parked like it was meant to be here and that someone was going to come out of the house and drive it away. You don't see this sort of thing anywhere else in the world!

But, on the other hand, if you do, let me know where it is and tell me the times of the flights.

However, we are getting ahead of ourselves here a little.

Back at the border post, I had had a pleasant half-hour wait in the freezing cold whilst some teenaged border guard searched my car and asked me some silly questions like "where did you get this passport?" and "What are you doing here?".

I sensed however that this was not the moment to give one of my stock answers, such as "talking to you, you dozy t**t", as I did on another subsequent occasion in the USA when someone asked me a similar stupid question.

Anyway, they agreed to let me in, so I was sent over to the cash machine in the border tax-free shop to get my $6 (and a cup of coffee and a sandwich at the same time), and pilulae to the CIA, as they would say in Ancient Rome. 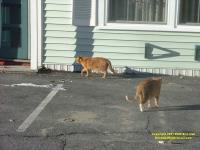 This is a photo of my fellow-lodger in the motel at Bar Harbor, Maine. And they were indeed lodgers, as the owner of the motel was caring for them for a friend.

But what with one thing and another, my stay in Bar Harbor was quite an unhappy time, and came to an abrupt end as my friends who work for an internet radio station called The Broadcast Web were sacked on the spot (whilst I was drinking coffee with them) as the station was closing down.

I know all about corporate America and how brutal it can be, but the manner in which they were sacked was something I could not take in. Basically "If you're free in 30 or 60 days I'll get in touch" and out of the door they went.

I sensed that this was not the time to hang around, and somehow wandering around Bar Harbor taking photos like a good tourist didn't seem to be the correct thing to do. I wasn't in that kind of mood right then.

But one things stood out during my visit to Bar Harbor, and I don't know if this typifies the American mentality.

I've already remarked that in rural North America there is this "communal lights out" at about 21:00 and the whole place becomes deserted.

Here in Bar Harbor EVERYWHERE was closed and that surprised me greatly. I know it's mainly a holiday resort but must still be some locals, surely! And with it being holiday season, I imagine that there would be quite a few second home owners around here too.

Eventually, I found a bar that advertised that it served food. So in I went, to find a handful of people in there, and to be told - "Yes but the kitchen closes at 9 o'clock". The guy there gave me directions to another bar - restaurant on the edge of town.

That place was indeed open, and had maybe 7 or 8 patrons. Luckily, the kitchen was still serving so I was able to order a pizza, without cheese (funny looks from the staff there, that's for sure).

On leaving at the end of the evening, the waiter told me to "have a safe drive".
I replied that "you mean a safe walk" to which he gave me ever such a strange look.
This prompted me to add "you know, these things that dangle from your hips, We call them legs. And they have feet on the end. You place them one in front of the other alternately. That is called 'walking'".

Anyway, off I went and there wasn't a soul about.

After walking maybe a mile, I noticed a girl walking towards me.

When she got to within maybe 50 metres of me, she inexplicably crossed the road to the other side.

This totally baffled me. Here we are - small town America, 22:30 - and she's afraid. Afraid of what? Now If she's have known me, then she maybe would had good reason for crossing the road but she didn't know me at all. I must admit - this had me puzzled for a while, and then I worked it out.

What was going through her head was that she was imagining what she would do to a lone female if she were in my place.

That was spooky. She had this thing going through her mind that she would attack this lone woman.

Now America is the land of the free, so they say. But this woman is certainly not free - she's a prisoner of her own guilty conscience and her own fear. She can't even walk the streets in her own home town in perfect safety for fear of what another American might do to her.

Now there is the U.S.A - they want go off to be the policemen of the entire world and send their armies to "keep the peace" in some far-flung corner of the world that no-one in the U.S.A has ever heard of.

However the citizens of the U.S.A are living in their own land in fear and in some internal mental anguish. They can't walk the streets in safety.

So does it not make sense that they should pull back their armies from all over the world where people don't want them (like just about everywhere that isn't the U.S.A) and have these soldiers stand on the corners of their own streets so that people can walk about in safety?

"But hang on a minute. Didn't they do that in the Soviet Union?" I hear you say

Well yes they did. And I've visited the Soviet Union often enough to know that one could walk about the streets in perfect safety in Moscow and Leningrad just because there were the soldiers on the street corners. You can't do it now that the soldiers (what's left of the Red Army) has been pulled back to barracks.

Now the U.S.A has

So what I'm waiting for is for some high-powered American diplomat or politician to admit that
"well, maybe, the Soviets did have a point after all"
Imagine - the Americans spent 50 years to bring down a political system they detested - and then imposed that system on their own civilians.

Now, that is what is really scary.

But the real reason why the Americans are in these countries is nothing to do with security or peace.

If you go back 150 years, you found the European nations colonising the undeveloped world like mad - and for 2 reasons.

The idea of "American peacekeeping" is in fact a way of ensuring that these countries have "friendly" governments in power who would be amenable to the idea of having tons of quarter-pounders and gallons of cola shipped to them.

In other words, it's economic exploitation. Using American tax-payers money to create a climate in which American capitalists can operate to expand their empires.

The same reason really why America doesn't take any action on inner-city drugs gangs. Every time some drug-crazed junkie steals your television, you have to go out and buy a new one. That's what keeps the American economy turning.

But anyway, I digress.

After a very long day I'm off to bed.