And now, a story of a disaster.

The plan was to drive from Digby down to Yarmouth and then get the ferry over to Bar Harbor. I know that this means that I have lost a day by coming over here to Nova Scotia but so what? That's a small proce to pay for a sail on board a ship.

It's always a bad idea to bring me anywhere near where there's a ferry. I go into such a bad mood. That's right - every time I see a ferry it makes me cross.

I'll get my coat

And I arrived at Yarmouth and the ferry terminal to be greeted by the famous words "Ferry closed for the season. Open again in April". Or was it May? I can't remember now.

Not that it made any difference. I'm only here for another handful of days.

So, back to Digby to go back on the return trip to Saint John.

And here I was greeted by the famous words "Ferry closed for the New Year festivities" (it was New Year's Eve).

I can't sit about round here all night in the cold waiting for a ferry to open up again tomorrow. So off to Amherst and then Moncton and back to Saint John, I suppose.

Only a 700 km round trip. That'll teach me to get myself carried away on a whim.

"But wait a minute, Eric. There's Halifax over there. You can't come to Nova Scotia and not see Halifax. And these mountains and the town of Caledonia look interesting too. And it's snowing up there too!"

You just can't keep a good man down, can you? And in the fading light and now heavily-falling snow, off I set.

The road was really beautiful up through the forests and frozen lakes, and Caledonia was a really picturesque hill town.

There wasn't really anywhere to stop for taking photographs, though. Pulling off the road meant parking in 18 inches of snow with who knows what underneath, and that isn't the thing you do in a hire car when you're in a hurry.

In any case it was becoming too dark to really get my money's worth from the camera. Mental note to self - "buy a better camera next time"

But then I arrived in Halifax, and went for a quick lap around the town in the car.

While I was driving around, I was quietly contemplating to myself that, when I was a kid I used to read anything and everything I could get my hands on. All about places like the Bay of Fundy and Halifax.

30 or so years later, there's really something satisfying about being able to travel the world and to visit all these places that were so familiar as pages and photographs in a book.

It was certainly far too dark to work the camera by now (I had to wait 17 years before I had the appropriate camera and decent lens for that), but I had a go nevertheless. 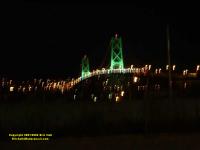 This is the Macdonald Bridge - between Halifax and Dartmouth viewed from the Dartmouth side. Opened in 1955, it was named after the former Nova Scotian Prime Minister Angus MacDonald who had been one of the big names behind the bridge and who had died in 1954.

It's a toll bridge and when I went over it I had to pay $0:25. However someone did write subsequently to tell me that it now costs $0:75.

And that reminds me.

If you too have any information to add to the contents of my site such as some nice local colour, or if you want to correct anything I've written, then - I'll be pleased to receive your comments. 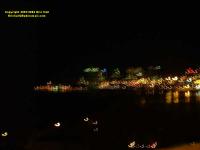 I had to check to see whether this was the date that I arrived in Halifax on my second visit. I couldn't think of any other reason why the Haligonians would want to flee the city in droves at that particular period.

From the bridge you get a good view of Halifax. This is the waterfront by night. So much for cheap digital cameras!

Anyone in mainland Europe who received a New Year's phone call from me received it from here in Halifax.

The area around where I was standing but on the Halifax side of the river was totally destroyed on the 6th December 1917 when the 3121 ton "Mont Blanc" exploded.

This ship was loaded with a deadly cargo, consisting of, depending upon which source you take (because I've read three reports and each one is different)

and possibly other things besides.

She arrived in the outer port area of Halifax, having sailed independently from New York in order to join up with a convoy that was leaving for Europe.

As she entered the outer port, leaving the harbour at the same time was the "Imo", a Norwegian ship that was carrying relief supplies to the occupied Belgians.

"Imo", a ship of 5000 tons was formerly the "Runic" of the White Star Line and a sister of the "Titanic", built in 1889 as a livestock carrier on the Liverpool - New York route.

Due to an obstruction in the channel normally reserved for departures, the "Imo" took the channel reserved for arrivals, and thus it came face to face with the "Mont Blanc" which was not flying the mandatory red flag to indicate that she was carrying explosives.

At first, neither ship would give way to the other, but then both ships simultaneously performed an avoiding manoeuvre that put them on a collision course. The inevitable result of this farce was that "Imo" collided with "Mont Blanc", which promptly caught fire.

The crew of the "Mont Blanc" abandoned ship without, inexplicably, opening the scuttle valves to allow the ship to sink.

As a result, the ship drifted slowly towards Pier 6, out of control, to a large audience of curious bystanders who had gathered to watch the tragedy unfold, unaware of the contents of the cargo of the burning ship.

Just 20 minutes after the initial collision, the ship collided with the pier, setting it alight, and then disappeared in a blinding flash of light with an explosion that smashed windows 50 miles away and was heard as far away as Prince Edward Isle.

Over 1600 people were killed instantly and nearly 500 others died as a result of injuries.

Of the local primary schools in Richmond and Dartmouth, only 10 children survived. More than 200 were killed in the Dartmouth School alone. Every child and member of staff at the Protestant orphanage at 1274 Barrington Street was killed.

A tidal wave of 50 feet was recorded, which deposited the hapless "Imo" on dry land, and substantial parts of the "Mont Blanc" were found up to 3 miles away.

This was probably the greatest man-made disaster in the whole of Canada, and the largest explosion in the world before the nuclear age.

The blasé manner in which people treated explosives in those days was absolutely astonishing.

There is a report in the "Liverpool Mercury" of 19 January 1907 of one Benjamin Redmond, master of a steamer the "Marie", being fined 40 shillings plus costs for having 6 oil lamps lit on his vessel in the Crosby Channel at the mouth of the River Mersey.

What upset the magistrates was that his ship was loaded with 40 tons of dynamite at the time!

On 14 April 1944 when the Canadian-built "Fort Stikine", loaded with 1395 tons of munitions, caught fire and exploded in the harbour in Bombay. The explosion was so powerful to be recorded on seismographs, and 18 other ships in the port were sunk.

About 30 acres of the city were totally flattened.

The ship was also loaded with 9,000 bales of cotton to fill the empty space in the hold, and a side-effect of the explosion was that these bales caught fire and were then hurled like great balls of fire ... "goodness! gracious!" - ed ... several miles across the city into the shanty town of shacks. This area burned for several days and nights.

No-one will ever know for sure the casualties in Bombay.

There was also an ammunition ship, the "USS Mount Hood" that exploded in a small dock in the Pacific in November 1944.

After the explosion, all they could find of the ship was a trench 200 feet long, 50 feet wide and 35 feet deep in the sea bed.

But I digress. And not for the first time. And neither will it be the last.

Actually Halifax (or what I saw of it) seemed to be quite a pleasant city with an attractive waterfront, and I shall be back again and again.

It was probably this news that prompted the mass flight of citizens out of the city.

So off I went, out of Halifax.

First stop was for fuel. Getting low. The Cavalier did about 600 km on a full tank of fuel. There was a full tank at Montreal and I fuelled up again at Tadoussac, and at Saint John.

I suppose I had! Obviously Halifax International Airport was the place to go to get fuel. Bound to be an all-night service station here!

Ha ha ha! What are you going to do now, Eric?

No point in going back, so "onwards or upwards", as Jim Dale said in "Carry on Columbus".

All was not lost however. A couple of exits further on was the big illuminated sign for an "Irvings" service station. So petrol for the car, coffee for me, phonecalls for people in the UK, and back on the highway again, acompanied by Hawkwind and followed by Tom Petty.

The idea was to get to Moncton before stopping.

Despite being a clear, bright night (the moon all through the holiday was beautiful) it was obviously snowing in the mountains and although I was absolutely tired out (it's no fun driving 600km through the snow and freezing cold in a strange country in a strange car) and my childhood bronchitis was setting in, I didn't want to stop before I'd crossed the mountains.

If it were to snow heavily during the night and early morning and we were snowed in, there'd be a long wait next morning of who knows how long before they would be cleared, and I had a time schedule to keep to, and I was already about 36 hours behind.

So on I drove alongside the frozen river to Truro where there was a big sign "Cobequid Pass now open".

I didn't remember this from any cursory study that I had made of the area, but I remember hearing about the Cobequids. Windswept desolate lonely mountains where the weather can change in minutes from the calm and isolated to the treacherous and angry.

So what was I waiting for? Up this lonely 4-lane highway I drove - just me all alone and on my own travelling slowly through all this snow with this brilliant moon illuminating everything around. This was eerie.

The road climbed higher and higher until it passed the summit and descended to this lonely toll booth with a man asleep in it.

So I woke him and paid the couple of dollars he asked, and I couldn't resist the temptation
"I bet this must be the most exciting job in the world"
"Not bad" he replied
"What do you do for excitement, then? Do you watch the grass grow?"
But, as Alfred Hitchcock once remarked to Kenneth Williams "It's a waste of time being funny to foreigners".


But he did tell me that the roads cleared a few kilometres down the valley - and he was correct too.

But I was about given out by this time and when eventually the town of Amherst and a motel rolled into view, I just couldn't go on any further and called it a night. New Years Eve midnight.

It was the most expensive night I spent in Canada, but Tom Petty was telling me that I didn't have to live like a refugee, and on this occasion he was correct.