DAY ONE
LEAVING ON A JET PLANE

It's only our family that could get everything backwards! (or @r$e first, as the legendary Chubby Brown

After years spent driving coaches around Europe loaded with countless Americans searching for their roots, I never realised that in order to search for my roots I'd have to cross the Atlantic too - only in my case to go to the Western shore.

Whatever prompted my ancestors to return to Europe once they'd made a successful escape is a matter for conjecture, but the reasons must have been pretty powerful to make them leave such a land of opportunity and adventure.

So this is a pictorial story of my visit to Canada 27 Dec 2001 - 4 Jan 2002, my exploration of places I'd always wanted to visit, the great time I had, the old cars I saw, the relatives I met (including 3 I'd never even seen before) and finally, my great-grandfather's grave in Mount Royal Military Cemetery

The car I hired was a white Chevrolet Cavalier registered FF62052 from Budget Rentals at Dorval. Unfortunately Dollar had let me down for the first time ever so I didn't get my Neon or my upgrade to a Cruiser (mind you, everything comes to he who waits provided he's prepared to wait long enough).

The Cavalier was actually quite acceptable). It was fitted with a CD player too - so much for the collection of tapes I took with me! But the positive side of this is that it's a good excuse to upgrade the CD collection!

So, what was the music?
Well - 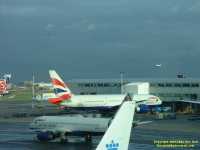 Here are a couple of photographs of my plane, that will serve to set the scene.

First thing that I have to say on arriving at Heathrow was upgrade. Yes, I was upgraded to intermediate class. First time ever. That was impressive. It quite bouyed me up on the long walk out to terminal 4 gate 23.

But the fact that terminal 4 gate 23 was miles from anywhere weighed me down. There was no coffee machine here, and I'm already nervous. 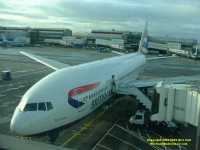 When I finally arrived at the terminal, all I could do was to sit here staring at it.

And still no coffee. And 7 hours 20 minutes to Dorval, unless someone decides to set fire to his shoe in the cabin. Then 8 minutes and 20 seconds screaming as we fall 39,000 feet into the sea.

In fact, I hate flying and the thought of looking at this plane for an hour with no way to get a coffee fills me full of fear

Is it any wonder I had to be carried off the plane after my first long-haul flight!

Having said all of that, the flight was pretty uneventful. I was sitting next to a nice girl who was on her way to visit her father somewhere in Ontario. We had quite a pleasant chat and the journey just flew by.

It seemed like no time at all before we arrived at Dorval.

Here at Dorval, it was snowing! And how! Landing the plane on the runway produced a shower of snow that was impressive in itself. As we taxied up to the terminal, all the snow gave us a very good idea of what the weather was like. This was what I had come here to see.

Next problem was actually getting in to Canada.

We had to wait for what seemed for ever to get through customs and immigration and I was wishing I had a guitar. I felt rather like Graham Nash trying to enter the United States

back in the 1960s
" Hey let me in, Immigration Man"
"Here I am, with my immigration form,
big enough to keep me warm
when the cold wind's blowing"


Eventually, I was interrogated by a cute-looking girl who looked about 12, with very long hair and glasses and dressed in Immigration Service uniform, and that was that.

After a great mix-up over the hire car (Dollar had forgotten I was coming, so they had to fix me up with a rival company) I eventually set out through the snowdrifts at a steady 30 mph (50 kph) and did the usual fallback trick of driving through the city and out the other side until I saw a motel sign.

Leave the snow for the daylight.

As an aside ... "ohh God!" - ed ... always drive through an unfamiliar city at a time when there is least traffic. If you become confused, it's no big deal. It's a lot more difficult trying to sort yourself out in the middle of the rush hour.

So where did my little voyage into the unknown take me? -That is - apart from a great many places that I had never ever visited before in my life.