The images are up anyway, I'll write the text "in due course". Don't forget that if you want to use any of the text or one of the images off my site, you need to read this first. 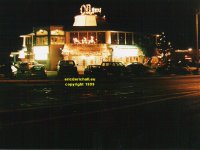 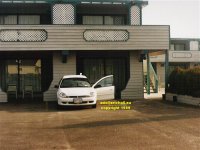 It's no good though trying to book a room here though because when I went past in 2017 there was nothing here but a hole in the ground. Obviously the disinfectant didn't work. 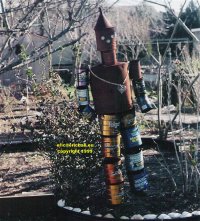 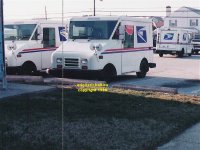 Here's a batch of United States Postal Service vehicles at the back of the Post Office at Ship Bottom. They are Grumman LLVs - the LLV standing for "Long Life Vehicles" as they were expected to have a life of 30 years. The first was introduced into Post Office service in 1987. It's said that the United States Postal Service owns well over 100,000 of them.

If you look closely at these vans, you'll see that they are right hand drive so that the postie doesn't have to leave his vehicle to put the post in the box. I've come across this elsewhere

Not many people know this, but the United States Postal Service played a leading role in American nuclear research. Whereas the British under Lord Rutherford spent 25 years and heaven knows how many millions of pounds trying to work out a way of splitting the atom, American scientists found an easier, cheaper and quicker way of doing it. They simply took an atom and put it in the mail in an envelope marked "fragile". 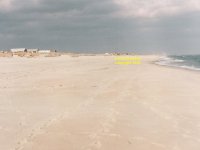 Long Beach Island New Jersey - the beach between Ship Bottom and Surf City. You have to admit that it's magnificent here.

Just don't go digging in the sand just here, though. You might have a most unpleasant surprise. What with the ban on digging down deeper than 12 inches, and a ban on the use of metal detectors, I suspect that there may well be more discoveries to be made.

I remember once a neighbour of mine

and regular passenger when I owned my taxi business describing the hunting for buried explosives as being a "true contact sport".

It's actually quite ironic that there's a trail of unexploded munitions hanging around a place where I have visited, you know. This kind of thing always seems to happen to me. Perhaps it's significant. Maybe someone is trying to tell me something.

In 2005 I was in a town in South Carolina called Myrtle Beach. One of the reasons for going there was that someone had told me that it had the best beach in the entire USA. Well, I already found that difficult to believe, but I had to go to look.

Now compare the beach there with the one here. And what do you think? Best beach in the entire USA? It's not even a beach. It's nothing but the son of a beach.

"A beach is a place where a man can feel
he's the only soul in the world that's real"
sang Roger Daltrey in Quadrophenia.

He had obviously been walking along the beach on Long Beach Island at the end of December. I mean - never mind the "real" bit - I was quite simply the only soul full stop.

But I could understand his sentiments. Out here on the beach, keeping within my reach, I knew exactly what he had in mind when he sang it.

Actually, this beach along here has a rather sinister claim. While swimming in the sea just off here on 1st July 1916, Charles Epting Vansant was the victim of a shark attack, the first in a series that became known as the "Jersey Shore Shark Attacks of 1916" and which were the inspiration behind Peter Benchley's book and the film Jaws 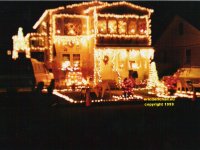 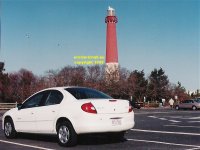 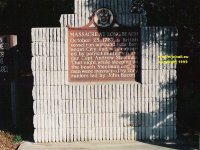 Massacre at Long Beach Island, New Jersey. The memorial to Andrew Steelman at the Barnegat Light.

Long Beach Island, New Jersey. View from top of Barnegat Light north to mainland. The large building in the distance is, I think, the nuclear power station.

There have been several artificial breakwaters at this site. The one that you can see is the umpteeth here at the site. One breakwater constructed about 80 years ago consisted mainly of old scrap cars.

I went immediately to fetch a bucket, spade, mechanical digger and a very large suitcase.

While you armire the view from top of the Barnegat Lighthouse south over Long Beach Island here in New Jersey, let me tell you about one of the most unusual if not astonishing transport encounters that took place here, just off the coast in the Atlantic Ocean.

See if you can picture the scene.

It's 15th October 1910, 20:00 hours (8pm), dark, and there's a thick Atlantic fog. And here you are in your four-masted schooner the Addison E Bullard whose mainmast is 110 feet. And all of a sudden something huge - enormous - suddenly appears out of the sky heading straight for you. It scrapes your mainmast, you hear voices in the sky, and suddenly the object turns at right angles and veers off into the night.

The Addison E Bullard had just had a close encounter with the airship America, which had earlier that day left Atlantic City in what was probably the first serious attempt to cross the Atlantic by air. It didn't in fact make it, coming down in the Atlantic just 400 miles off the American coast, but nevertheless it was a valiant attempt.

Who knows what might have happened had the America not encountered the Addison E Bullard in such a fashion. It clearly unnerved the airship's crew, for the commander, Walter Wellman, never flew again.