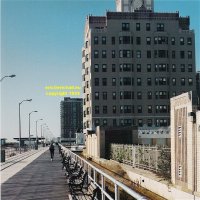 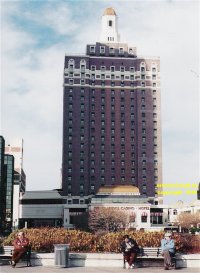 Atlantic City New Jersey - looking south from the pier. This one and the next have to be two of the best photos I had ever taken up to that point.

Atlantic City New Jersey - looking north from the pier. Yes, I am impressed with this one too. 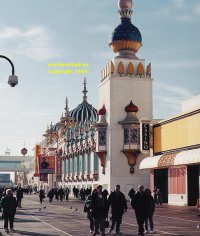 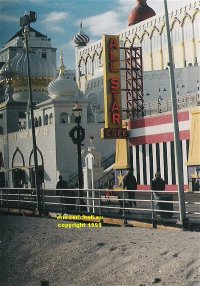 The Taj Mahal is one of three casinos in Atlantic City owned by Donald Trump. It is claimed to be one of the world's largest casinos and its hotel is said to be one of the most luxurious ever built. At one time it was the number one hotel here. Trump's other two casinos are the Plaza, further along the boardwalk, and the Marina, which as you might have guessed, is by the marina here.

Trump has quite an affection for Atlantic City, and the city has done him proud. In 1989 he proudly announced "if there is one word to describe Atlantic City, it's 'Big Business'".

I'm not too sure how much reliance I would place on a casino where the owner is unable to count, but it certainly goes to prove that to be a success in gambling, the ability to do simple addition is not an essential skill.

I'm not quite sure exactly what kind of pleasure people get from feeding these things with all of their hard-earned dough. But yes I know - I've heard it said that there are people who have come away from these kind of places with small fortunes. But that's because they have usually gone there with large fortunes. 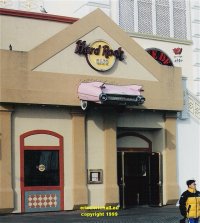 Having said that however, there is some reference to an "old steel pier" in Atlantic City and I wonder if this might be it. It's certainly old. And if it is indeed the "old steel pier" referred to, a human body lay undiscovered on it for a period of about 6 months or so . There's obviously a story behind this case.

You can see why they have nothing (well, almost nothing) but casinos here at Atlantic City. Imagine trying to grow anything in this ... err ... soil.

Atlantic City New Jersey - Taj Mahal and Showboat casinos viewed through the poverty, dereliction and demolition. I was quite impressed with the idea of symbolism in this photo.

There is no truth in the rumour, by the way, that Donald Trump is planning to build his long-awaited "Trump International Tower" here.

Atlantic City New Jersey - dusk over south shore. This is another impressive photo.

Atlantic City New Jersey - dusk over north shore. This photo won me a prize, but I can't remember which one (or what for, either) .

Well, that was Atlantic City, wasn't it? What did you think?

To me, it was all false, artificial, pretentious. Whatever you like. It was sad to see such a contrast between what appeared to be the rich part of the city with the glittering casinos and the like, but a closer inspection revealed that even the richness was nothing more than a veneer quickly applied over a structure that's less than solid and all frayed around the edges.

Nevertheless, it was interesting for having come here to see it. It's not something you should miss if ever you're out this way. Just remember not to take it seriously.

Other big disappointment was that Bruce Springsteen wasn't here. He said meet me tonight in Atlantic City

but he never made it. He probably guessed that I had neither put on my make-up nor fixed my hair pretty.

One thing I haven't mentioned about Atlantic City is a little-known fact concerning its history in the pioneer days of aviation. It played an important role in the development of airships and was the base for a couple of attempts at transatlantic crossings. Walter Wellman took off from here on 15th October 1910 in the airship America but came to grief 400 miles out to sea.

However, that was about 399 miles farther out than the attempt on 2nd July 1912 by Melvin Vaniman (a member of the crew of the Atlantic) whose airship Akron exploded just minutes after take-off for Europe, with the loss of all on board.

In May 1919 the Aero Club of America held an air rally at Atlantic City and as there were no rigid airships available in the USA at the time the club approached the British Government to see whether or not a British "rigid" might take part. This was the basis of the successful double-crossing of the Atlantic by the British airship R34, although it arrived too late to take part in the rally.

On the way back to the Quarter Deck Motel, I came across this pile on the edge of Atlantic City (or should that be the "Atlantic City Limits"), nicely illuminated (or lit up, even) for Christmas.

Impressive though it may be, it isn't a patch on what I was to see later on Long Island. Nevertheless, it was good enough to be going on with.