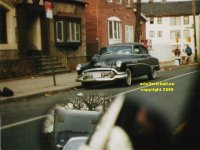 This old car was simply parked up in the street on Staten Island in New Jersey.

Identifying American vehicles of the late 1940s and early 50s is not really my thing so I've no idea what it might be. But if you know what it is, please .

One suggestion that I've received is that it's a 1951 Buick Special but I wouldn't really know about that. 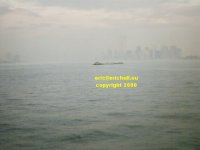 This is the view of Manhattan (or Personhattan, as it has to be called these days) that you have from the New Jersey terminal of the Staten Island Ferry.

In the olden days, when the vehicle ferries still operated, the most exciting way to arrive in New York if you had hired a car at John F Kennedy Airport was to take the Belt parkway, cross the Verrazzano Bridge and drive down to the ferry terminal. 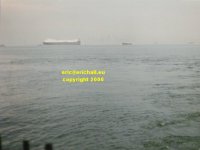 Not having a zoom lens in those days, I couldn't identify this particular ship and I wouldn't even like to speculate on its nature either.

And if you look very carefully in the background (click on the image to enlarge it) you can see the New York skyline hidden in the fog. 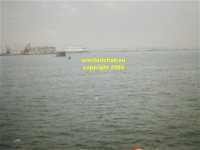 The ferry still hadn't arrived so I followed the ship up the Hudeson River with my eyes.

That is, I believe, the Bayonne Terminal at Jersey City, part of the Port of New York and New Jersey in the Hudson River. The whole area of the port throughout the estuary, both here and in New York State, is said to be the third largest in the USA and the busiest port on the eastern seabord of North America. 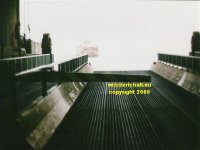 Eventually, our ferry boat arrives out of the gloom and fog. I was peering down the loading ramp when I caught my first glimpse of her.

The loading ramp is there because in those days, back in 1999 and 2000, motor vehicles were carried on the ferries. However after the incidents of 11th September 2001 vehicular traffic was suspended and has never resumed.

The reason given is that it's not possible to install the facilities that they deem necessary to search every vehicle.

And while I was reviewing this page during the Corona virus, it struck me that Americans are very selective about what they decide to ban. A lock-down of cars on the ferry because of the perceived threat from opponents of their Government, yet they seem to protest very violently against a lockdown because of a very real global pandemic.

I don't understand that at all. 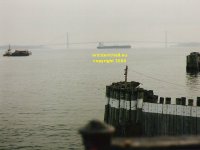 A little earler, I mentioned the Verrazzano Narrows Bridge.

That's it down there, viewed across Upper Bay from Staten Island. The central span of this bridge is a massive 4260 feet long, and when it was built, between 1958 and 1964 it was the longest suspension bridge in the world. It lost that title in 1981 when the Humber Bridge in the Uk was opened.

The bridge is named for Giovanni de Verrazzano, the Florentine adventurer who is the first European known to have entered the narrows into what he described in a letter to King Francis I of France as "a large lake".

His claim was largely dismissed for many years and these supposed letters were said to be nothing but a fanciful flight of imagination. For this reason he never received the attention that was given to Henry Hudson who came here 70-odd years later.

However in the 1970s a letter written by the King was discovered that made specific reference to the letters that verrazzano wrote.

We're now all at sea, going across Upper Bay right in the middle of the Hudson River. And being all at sea should not come as any surprise to anyone as it's a permanent state of affairs with me.

I didn't take a photo of my boat unfortunately becasue we didn't have much time to loiter around on the quayside but we passed one in midstream going the other way and so you cans ee what they look like.

If you look to the extreme right of the photo you can just about make out the pillars and cables of the Brooklyn Bridge. 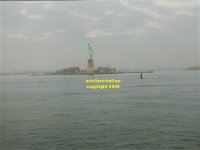 That over there is the famous Statue of Liberty in Upper Bay, or Hudson River viewed from the Staten Island Ferry.

It is in fact correctly known as "Liberty Enlightening the World" and was designed by Auguste Bortholdi and built in 1886 by no less a person than Gustave Eiffel (from whence doubtless comes the American phrase "hey, get an Eiffel of this!").

From the base of the pedestal to the top of the flame it is 305 feet high, of which about half is the pedestal of granite and concrete, and the remainder is the statue made of copper sheeting over an iron and steel framework. 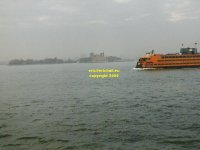 Over here is another feature of Upper Bay that is nothing like as well-known as the Statue of Liberty but is probably much more significant to the history of New York and the history of the USA as a whole.

It's Ellis Island, which was the landfall for millions of immigrants to the USA during the period of the latter part of the 19th Century and the first half of the 20th Century. No-one can be absolutely certain of course, but a figure of 12 million immigrants being processed here between 1892 and 1954 is pretty widely quoted.

After closure, it was left abandoned until the USA's National Parks Service took it over in 1965 and it now forms part of the Statue of Liberty national Monument Park.

We're now well across Upper Bay and the Hudson River on our Staten Island Ferry and about to arrive at the terminal in Manhattan.

In 1999 when I went on this voyage, the World Trade Center was still there. But the events of 11th September 2001 changed all of that. The skyline looks completely different today of course and who knows? One of these days I might go back there and have a look to see how it's shaping up.

But not by car though. This is, in my opinion, the ONLY way to arrive in New York. There is no other way to appreciate the full impact of the city. But no cars allowed today. 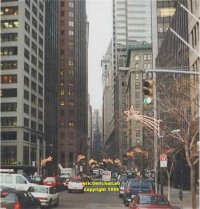 The street here looks fairly nondescript so it's very hard to believe that this is probably one of the most influential streets in the World.

It's actually Wall Street, believe it or not. The Home of the New York Stock Exchange and of NASDAQ, and formerly the home of many other financial institutions that have now moved on elsewhere.

It's commonly said to be the site of de Wal, the wooden rampart that the Dutch built on the edge of their settlement to protect it from native incursion.

However the land was purchased from the natives by someone calle Peter Minuit, who wasn't Dutch but a Walloon who came with a party of other Walloon families to the area in 1624 and it's equally possible that de Wal might relate to "the Walloon". 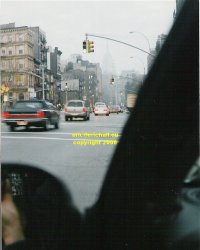 Somewhere in the fog and gloom of this photo is the Empire State Building.

Now regardless of whatever opinions you have, you cannot fail to be overwhelmed by some of these immense skyscrapers in New York, even if you are not impressed by them.

Kenneth Williams, the British actor and comedian once told a delightful story of Lord Balfour's visit to New York

and how he was buttonholed by some gushing skyscraper enthusiast.
"One of the city's skyscrapers is so solid that it will easily last for a thousand years"
"Dear, dear me. What a great pity." he replied.

On that note, I'll put my foot down. If I'm not careful I'm going to end up being caught in the traffic and that's not something that I fancy, even during a holiday period like this. Americans aren't big on holidays, with not having a decent Human Rights system, and there are bound to be hordes of people around at chucking-out time.