Now why does one county in the USA merit a particular page all to itself? Well, the answer to that was because there was so much of interest (at least, to me there was) to see. 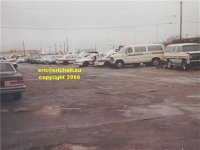 Like this row of derelict police cars here in this yard that look as if they have been here for quite a while, for example.

many of them are in a depressing state too, accident-damaged and with bits missing too. 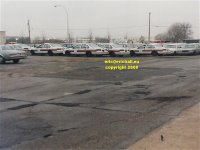 I was wondering about the other cars here too.

Are they cars that the police have towed in or seized? Who knows. They could equally well be "plain-clothes" police cars that have been retired from service and awaiting disposal. 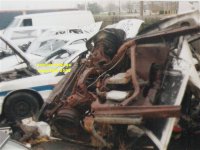 The pile of wreckage is impressive too, particularly the one in the foreground that seems to have been cut in two.

It's very reminiscent of the bad old days of the 1950s and early 1960s and the proliferance of "ringers" on British roads. Unscrupulous motor traders would buy two cars - an accident damaged front-ender and an accident-damaged rear-ender - cut off the damaged ends and weld the two good bits togther to make one good-looking car.

The welds wouldn't be watertight of course and the continuous heat would weaken the metal so that the car would just fold up after a while. It was that kind of cowboy-engineering that led to the introduction of the Ten Year Test in 1960. 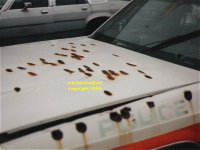 This rather large collection of holes looks extremely interesting to me.

Many years ago I saw a derelict and abandoned pre-war Citroen on a farm in Brittany and I was assured that it had been sprayed with a German machine-gun during a Resistance operation during the war. And the damage that had been inflicted on it did not look dissimilar to this.

There's clearly some kind of exciting story behind this damage and I'd love to know what it was. 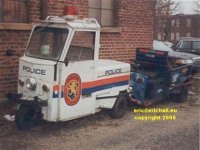 This cute little thing was also there.

By the looks of things, I would say that it's battery-operated, judging by the rear, and it's probably some kind of tow-truck, maybe for pulling the wrecks around the yard. Of course with being three-wheeled with the wheel well-extended like that, it would be super-manoeuvrable in tight corners.

As an aside, if anyone knows anything about this place or the vehicles in here, and let me know.

And if you think that that's enough excitement for today, we haven't even started yet.

Idly wandering around the area, as you do ... "as YOU do" - ed ... I came across a pile or aircraft parked up on a car park. It's not the kind of thing that you get to see every day, so I went to investigate.

Not that I know what they are of course, so if you can throw some light on the matter and let me know. 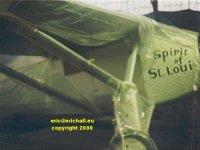 On the other hand, I don't think that there is anyone who won't know what this is.

As you know, it is a replica of Charles Lindbergh's aeroplane (or airplane) Spirit of St Louis in a private museum in Nassau County, Long Island, New York State and it's probably the most exciting thing that I've ever found on my travels to date.

I'd presented myself at a nearby building to make enquiries about the machines in the carpark. I was presented to someone who asked me a few pointed questions about early aviation history, which I was able to answer and, presumably satisfied with my credentials, invoted me upstairs, presumably to see his etchings.

And I never did get to find out about the machines outside.

Being able to sit inside Spirit of St Louis, even if it is only a replica, is a privilege that few people have ever been granted, and I considered it an honour.

Although it's a plane in which Lindbergh himself had a considerable amount of input into the design, in his book he described it on take-off as "being like an overloaded truck".

One replica - the "Paul Mantz" replica - (I don't know if it was this one) was flown by Charles Masefield who described it as "an absolute heap. It's completely unstable, controls unco-ordinated, ailerons enormously heavy, elevator terribly light, rudder totally ineffective, you can't see where you are going, the engine vibrates like mad and there are hardly any instruments" (Well, dont mince your words - tell us how it REALLY is).
Even Mantz was obliged to add that "it was absolutely hideous to fly and (he) could not understand how they had gone so far wrong when they built the replica"
Mind you, the final word must surely go to Lindbergh himself who flew it a few years later. "Do you know?" he said "I had forgotten just how nice that little aeroplane was! You've got it exactly right."

And I reckon Lindbergh had got it exactly right too. During World War I the British turned out thousands of reconnaissance aircraft called the Be2 and they were designed to be totally and absolutely stable so as to give the best reconnaissance platform. However this perfect stability was their own downfall as when they were attacked by a German fighter they were impossible to manoeuvre and so they were shot down in their thousands.

Most of the high scores of the major German aces were as a result of shooting down Be2s and their derivatives - the "Fokker Fodder" - and this gave rise to the legend of the "20-minuters" - the average life of a British Royal Flying Corps pilot in the air over the Western Front being just 20 minutes.

Mind you, how much of this 20-minute lifespan was due to the dreadful aeroplanes that the pilots were expected to fly, and how much of it relates to the stubborn refusal of the British Armed Farces to equip their pilots with parachutes (later in the war German pilots had them) for fear that they would "desert their machines" is a good question. If the pilots weren't killed by the machine gun fire they could either burn to death or leap to oblivion.

With The Spirit of St Louis being as it was, Lindbergh had to fly it every minute that it was in the air and couldn't relax the controls. This was probably what prevented him falling asleep and crashing during his 33-hour flight. 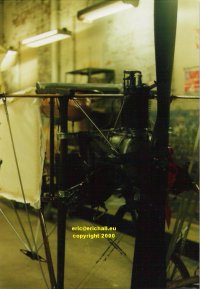 But it beats me what it is. Three-cylinder rotary enines are very rare and i've never been able to trace more than two or three manufacturers, none of whom ever fitted one into an aeroplane as far as I can tell.

It's another thing for which I would appreciate more information, so if you know anything.

This was something else in here that was quite interesting.

Not having had anything handy with which to make notes, I can't now tell you what it is. It's a box-kite kind of thing very reminiscent of the type of aeroplane that Bleriot would have flown across the English Channel back in 1909 and served in the very early days of World War I.

And I wonder if the three-cylinder rotary engine belongs in here.

And that wasn't all of the excitement either.

Just around the corner from here I came across a length of derelict railway line with a dismantled steam locomotive sitting on it. I had a good look around and noted that this section of track is isolated from anywhere else on the railway network. The only way this locomotive is coming out of here is in piecesa, and it looks like someone has already made a start.

I noted that various parts, like the wheels for example, had been numbered, so I was wondering if this would be for ease of re-assembly elsewhere.

E- if you know anything about this.