DAY FOUR part I
OVER TO NOVA SCOTIA

I arrived in Saint John quite late that night, and found a motel at the entrance to the town shortly after pulling off the motorway.

It was nothing special, but there again neither was the price. I had a walk around the area but there was absolutely nothing at all to see, let alone eat, so I made do with nibbling on whatever I had in the car.

You are probably wondering why this photo looks a lot nicer and clearer than the others of this period. The fact is that I forgot to photograph it at the time. However I passed by here in 2011 with much better equipment on a much nicer summer day so I duly obliged.

Next morning, I was up early and tracked down the ferry across the Bay of Fundy to Digby, Nova Scotia. I absolutely had to make that crossing. This was definitely going to be a highlight of the entire journey. 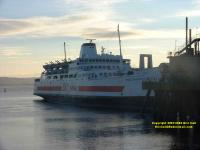 Down at the dockside already moored was the "Princess or Acadia", and I had to say that I was ... er ... surprised.

The photo doesn't actually reproduce adequately the condition of the ferry. Just let me say that it was built in 1971 here in Saint John, and she looked every day of her 30 years of age.

Given that it is "an asset of the Federal Government and leased to the ferry company" then I can only say that I am not surprised. I suppose whenever there's a repair to be done, they each try to pass the buck to the other interessee, and of course no-one is going to invest money in tidying it up when it's not in the financial interest of any of the parties.

She displaces 10,000 tons, which is a good size, but not a patch on some of the ferries on which I made 3-hour crossings over the open ocean some three or so year later.

And frankly, at first sight, I'd have been happier on one of those.

Someone loitering in the vicinity told me that the boat wasn't due to sail for a few hours yet, so I went for a drive around the town and a poke about the mall. There didn't seem to be much to see - mostly factories and industrial units and so on.

Of course, shopping these days in North America isn't a patch on what it used to be. After all, when you've seen one bunch of shops you've seen a mall.

Usually there are all kinds of stuff loitering around on industrial estates in North America, and they are well worth a good poke around. But not here, so I wasn't disappointed when I had to make my way back to the boat.

Back at the ship in time for the sailing. And we didn't have long to wait before we were allowed to board.

Once we'd got ourselves all organised and the ship started slowly to reverse from its berth, I wandered off to take a few photographs. 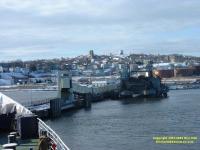 There was a good view from up on the top deck of the ship.

Looking at the dull reddy-brown oil tanks you can get an idea of Saint John.

Since the railway arived here it saves a great deal of time for the larger ships to pull into the Bay of Fundy, unload, and then for the freight to go by rail up to Montreal, instead of the ships having to negotiate the Saint Lawrence River.

That's especially important during the winter when the St Lawrence is iced up - although with climate chenge the icing period is becoming shorter and shorter.. 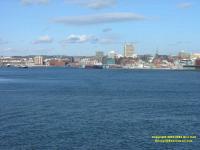 This photograph shows the north bank of the Saint John River and the commercial centre of the town. Much of it seemed to be fairly new, and I recalled from my drive around that there wasn't a gread deal worth seeing.

The Saint John River is off to the left of shot.

I mentioned that the tides in the Bay of Fundy are claimed to be the highest in the world, reaching a height of 12 metres (or 40 feet in real money).

There are quite a few examples of this in the area, as you would expect. 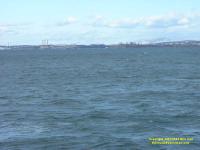 The photograph on the left gives a good idea of the industry that's here in the city of Saint John.

There's quite a considerable traffic of cargo ships sailing into and out of the harbour here - more so than in many other ports where I've been obliged to wait.

In fact, I think that only Dover has been able to match the volume of maritime traffic that I've seen, and most of that was passenger ferries to and from the mainland. 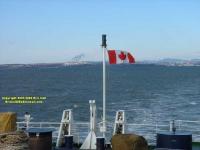 Here is a really good view of the town, with the river right in the centre of the photograph.

But I really took this photograph because I suppose you might say it's symbolic. I think I just about caught the flag perfectly, and the sharpness of the wake of the ship has come out really well.

The nice blue sky, indicative of good clear weather, sets the scene quite nicely. I remember hoping that it would hold out for the rest of my trip ... "quite" - ed.

I was really impressed with this, and had it on the desktop of my computer at work for a while. When I explained to a couple of my colleagues that it was symbolic, one of them replied that it was definitely "sym". The other one said that it was something else. 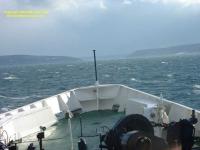 And look at this lot! Yes, the nice blue sky that we had earlier and which was indicative of good clear weather has disappeared, as you can see. What happened?

I'd been downstairs in the restaurant tucking into this huge plateful of traditional fish and chips, which was absolutely delicious. I'd noticed the ship starting to toss about, but I'd just taken it as being the turning of the tide, and thought no more about it.

I was totally astonished when I went back outside afterwards, and all of this met my eyes.

might get seasick watching the sea on the television, but many people would get seasick just from looking at these photos.

As for me, I'm lucky. I have my pieds marins because I'll tell you something else.

The sea might look rough in this photograph, but in reality it was 10 times worse than it looks. We weren't half being thrown about in a typical Maritime storm. The speed at which it sprung up can easily explain how disasters such as that at Escuminac in 1959 could happen. 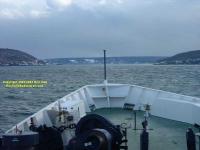 This is Nova Scotia, in the middle of a nice raging storm.

The gap that you can see in the coast dead ahead leads to a sheltered bay known as the "Digby Gut". This is where the port of Digby is situated.

And it was just as well, I reckoned, that it was in some kind of shelter.

When I was able to stand still and not be tossed about the deck, I could get a good view of the mountains in the background. The deep grey in those clouds coupled with the freezing windy conditions told me that there was one wicked snowstorm going on up there.

I stood out on deck here for a while having a good look, and it really wasn't such a good idea. This was where I reckon I caught the bronchitis again, something from whch i've suffered ever since I was a small child. 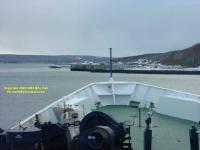 But that was later.

Right now, we're arriving in Digby, and the end of the journey and where we all disembark, suitably fortified by enormous plates of delicious fish and chips.

What possible justification can P&O and the other cross-Channel ferry companies put forward with the prices that they charge for an equivalent crossing across the English Channel?

Don't forget that in 1998 this ferry crossing was taken over by a private company and is now run on a commercial basis, and the aim is to make a profit.

In August 2006, the company announced that it was suspending operations at the end of October due to "low ridership and the high cost of fuel". There were also claims that the "Princess of Acadia", still in operation, was "at the end of its natural life".

The local and national government gave the company $8,000,000 to carry on sailing, but no decision was made as to whether or not to replace the ship.

And the Government said that there would be no more money coming either.

I said higher up the page that the ship looked every day of its 30 years. When I came to revise this page with some additional information in 2011 and noticed that the ship was still sailing, I wondered what on earth it looked like then.

When you think of

then for that $8,000,000 they could have bought something much more modern, and had the purchase price back from the fuel saving.

Nevertheless Princess of Acadia struggled relentlessly on until 2015 when, at 44 years of age, she was finally replaced by a second-hand ferry from Greece.

And having sailed on a few Greek ferries in my time, if the Greeks didn't want to keep it then that tells me all that I need to know.

In 2018 Princess of Acadia was broken up by the Marine Recycling Corporation of Port Colborne, Ontario

However, back to my little voyage of today and there was real snow too when I got off the ferry. Proper powdery stuff.

I was going to enjoy the drive down to Yarmouth and the ferry over to Bar Harbor in Maine, wasn't I?